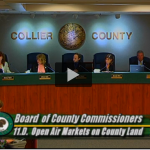 During its February 10th meeting, the Board of County Commissioners asked for help from the Council of Hispanic Business Professionals to work a policy proposal aimed to keep the Golden Gate Farmers Market all year round. The proposal has to be led by County staff which will work it with the Golden Gate Civic Center Board and The Hispanic Council. The proposal has to be crafted before April.

The government request came after the Commission unexpectedly voted on January 27th to close the market; a decision that had to be reversed a few days later as the County has a contract with the market operator and also after despicable comments from Commissioner Tom Henning who called the market's vendors "Gypsies", a remark that outraged the Hispanic community as Golden Gate City is highly Hispanic-populated area.

Previous Post
CHBP DONATES $10,000 TO GRACE PLACE
Next Post
THE HISPANIC COUNCIL TO HELP ON AN ALTERNATIVE TO DISBANDED HISPANIC ADVISORY BOARD.